The sharing economy is thriving, but the work of volunteers is often overlooked 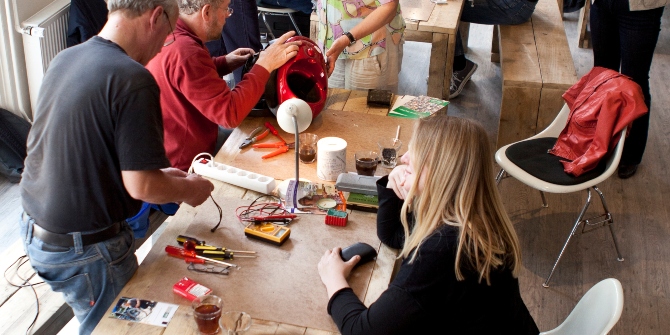 Over the last year, we interviewed sharing economy organisations and their volunteers in Germany. We found that volunteers matter for the success of these organisations because they share resources and qualities while keeping the organisations’ mission and community alive.

Not all sharing economy organisations rely on volunteers to create value. In our research project in Germany we find it useful to distinguish between two business models in the sharing economy. In the platform business model a digital platform supports the access to services or goods through which for-profit organisations seek to provide an experience with a social impact or a life-style experience against payment. Organisations with a grassroots business model focus on social and ecologic goals at the local level. Communal living organisations and gardens as well as repair cafés seek to improve the everyday life of people in their community by offering joint activities, access to education and help. Food sharing and car sharing organisations fight food waste and reduce traffic. Organised as non-profit organisations, among other forms of support, they rely on the intrinsic motivation of volunteers and the common values and norms they share.

Oftentimes they are places with a critical and alternative way of thinking, aiming to reorganise the economy and striving for political changes and a transformation of society towards more ecology and social justice. Organisational processes build on a small circle of individuals leading the coordination and management but the limited availability of volunteers, their commitment and their skills require organisational flexibility and informality.

Who are the volunteers and what do they share?

What are the resources volunteers share in their volunteering work? We found that volunteering in the sharing economy is based on sharing time, skills and knowledge. First, volunteers in organisations we interviewed dedicate quite some time to community work. Some of them view volunteering as an activity in addition to a paid job or thereafter. Occasionally, they spend so much time that their organisation is encouraging them to volunteer during limited hours in order to protect them from overload. Second, volunteers frequently contribute social skills, such as empathy and lifeblood. Third, knowledge is a very valuable resource. For instance, repair cafés and bartering circles depend on technical knowledge of their volunteers and sharing economy organisations also welcome volunteers with work experience, like having a routine in making phone calls.

How to keep volunteers?

What can other organisations learn from this in terms of mobilising volunteers? As one interviewee remarked, leading volunteers is the fine art of human resources management. Contrary to paid staff, management cannot exert pressure on its volunteers. What begins with their appropriate selection continues with the right way of retention. It seems to be worthwhile for organisations to recognise that volunteers differ in terms of time constraints, commitment and talents while maintaining a close connection to them.

Julia Kristin Göhringer is a political scientist with a strong interest in alternative forms of organising, sustainability, resource policymaking and data analysis. She is a postdoctoral researcher at the Hertie School in Berlin.

Johanna Mair is professor for organisation, strategy and leadership at the Hertie School in Berlin. She is also the co-director of the Global Innovation for Impact Lab at the Stanford Center on Philanthropy and Civil Society and the academic editor of the Stanford Social Innovation Review.