It has become almost a rite of passage for investors, at least since 2008, that they will be tested by a market crisis precipitated sometimes by political developments (Brexit), sometimes by governments (trade wars), sometimes by war and terrorism (the US/Iran standoff) and sometimes by economics (Greek default). With each one, the question that you face about whether this is the “big one”, a market meltdown that you have to respond to by selling everything and fleeing for safety (or the closest thing you can find to it) or just another bump in the road, where markets claw back what they gave up, and then gain more. After yesterday’s global meltdown in equity markets, I think it is safe to say that we are back in crisis mode, with old questions returning about the global economic strength and market valuations. I have neither the stomach nor the expertise to play market guru, but I will go through my playbook for coping.

Start at the source
This crisis has an uncommon source, insofar as it is one of the few that is not man-made (at least based upon what we know now) and is thus more difficult to predict, in terms of how it will play out. As a novice in infectious diseases, here is what I know at the moment:
In short, there is a lot more that we do not know about COVID-19, than we do, at least at the moment. While it has not been labeled a pandemic yet, it seems to have the potential to become one, and we do not yet have a clear idea of how quickly it will spread, how many people will be affected and what will push it into dormancy. It is also clear that much of this uncertainty will get resolved by real-time developments, not by collecting data or by listening to experts to tell us what will happen.

Get perspective
There is no denying that the last week has been a rocky one for investors, and a 1800-point drop for the Dow over two days (February 24 &25) is bound to add to the sense of foreboding. Since the first casualty of a crisis is perspective, it may be worth stepping back and looking at the market through wider lens. After the drop yesterday (February 24), the S&P 500 was at 3225.89, slightly above where it started this month (February 2020) at. In short, investors in the index were back where they were 18 trading days ago. Bringing in February 25 into the picture does put you below that level, but it still way above what it was a year ago: 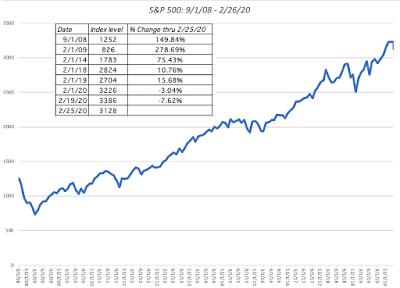 In fact, extending the comparison to longer time periods only makes the hand wringing over the last week’s losses look even more absurd. This is both good and bad news. The good news is that, if you are a diversified investor, your portfolio should not look dramatically different from what it looked like at the start of the year and much, much healthier than it looked a year ago, five years ago or ten years ago. The bad news is that the big run-up in stocks over the last decade has left you exposed to more and bigger losses to come. The bottom line is that your concern should not be about the damage to your portfolio from the last week’s developments, but the damage that is yet to come.
Have a framework
With perspective in place, I am now in a position to look to the future, since that should govern how we react to last week’s developments. Given my investment philosophy of trusting fundamentals and value, I have to go back to my basic framework for valuation, which is to tie the value of an investment to its cashflows, growth and risk. When valuing the overall market, here is what it looks like: 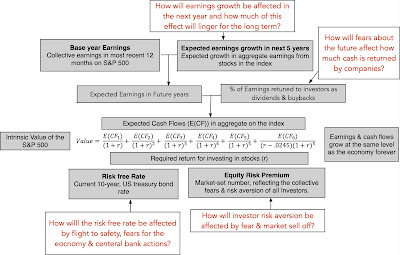 With my value framework, the effects of the Corona Virus will play out in my forward-looking numbers in the following inputs:
1. Earnings Growth: Even at this early stage in this crisis, it is clear that the virus is having an effect on corporate operations. With some companies like hotels and airlines, the effect that the virus has had on global travel has clearly had an effect on revenues and operations, and it should come as no surprise that United Airlines announced, after close of trading on February 24, 2020, that it was withdrawing its guidance for revenues this year, as it was waiting for more information. With others, it is concern about supply chain disruptions, especially with Chinese facilities, and how this will affect operations in the rest of the world. The follow up question then becomes one of specifics:
To illustrate the point, I look at how three different perspectives on growth will play out in growth rates, based upon how much of the drop in earnings this year is recovered over the following years: 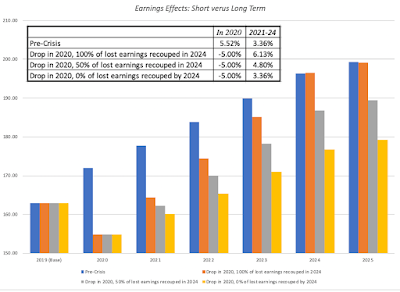 Note that the first series is the unadjusted earnings, prior to the corona virus scare and that in all three of the scenarios, there is a drop in earnings of 5% in 2020, putting earnings well below expected values for 2020, but the difference arises in how earnings recover after that. If none of the drop in earnings in 2020 is recouped in the following years, the earnings in 2025 is 179.22, well below the pre-virus estimate of 199.28. If only half of the earnings drop is recouped, the earnings in 2025 is 189.41 and if all of the earnings drop is recouped, the earnings in 2025, even with the virus effect, matches up to the original estimates.
2. Cash Returned: In 2019, US companies returned 92.33% of earnings as cash to stockholders, with a big chunk (about 60%) coming from buybacks. That high number reflects not only the cash that many US companies had on hand, but a confidence that they could maintain earnings and continue to pay out cash flows. To the extent that this confidence is shaken by the virus, you may see a pull back in this number to perhaps something closer to the 85.24% that is the average for the last decade.
3. Risk and Discount Rates: Finally, the required return on stocks will be impacted, with one of the effects being explicit and visible in markets, in the form of the US treasury bond rate and the other being implicit, taking the form of an equity risk premium. If investors become more risk averse, they will demand a higher ERP, though as the fear factor fades, this number will fall back as well, but perhaps not to what it was prior to the crisis. The fact that the equity risk premium is already at the higher end of the historical norms, at about 5.50% on February 25, 2020, does indicate limits, but there could be a short-term jump in the number, at least until there is less uncertainty.
Using this framework on the S&P 500, you can see how each of these variables play out in value.

I am not an expert on infectious diseases, and the health and economic impacts of this virus are likely to play out as developments in real time, requiring that I revisit this framework frequently. Based upon my estimates of how this virus will affect the numbers, the value that I get for the index is 3003, about 4.14% less than the index level of 3128.21 at the close of trading on February 25, 2020, which, in turn, represents a significant drop from the level of the index a week ago. To the question of whether a virus can cause this much damage to the markets, the answer is yes, though whether it is an overreaction or not will depend on how it plays out in the numbers. For the moment, though, if you are tempted to buy on what looks like a dip, I would suggest caution just as I would argue for slowing down to someone who wants to do the opposite and sell. As you look at my assumptions about how the virus will play out in earnings (both short term and long term), cash flows and risk premiums, some of you may disagree (and perhaps even strongly) and you can use this spreadsheet to arrive at your own valuation of the index, and use it to drive your actions.
To thine own self, be true...
It is entirely possible that I am underestimating the impact of this virus on economic growth and earnings and that I should be panicking more, but it is also plausible that I am over adjusting my numbers too much. The bottom line with my calculations is that I am inclined to do very little, at the moment. I don’t feel the urge to buy the market, because there is a plausible case to be made that the adjustment in value, steep and sudden, was merited. I feel little need to sell either, because I don’t see an over valuation large enough to trigger action. As for whether I should be reducing my exposure to companies that are directly affected by the virus (hotels and airlines) and increasing my exposure to companies that are more insulated, I don’t believe there will be any segment of the market that is fully protected from the consequences, no matter how far you get from China and from travel-oriented companies. In fact, if there is a segment of the market where you are likely to see over reaction, it is likely to be in airline, travel and energy stocks, precisely because they are in the center of the storm. Do I now wish that I had bought Zoom before this crisis reached full blown status? Yes, but I am not sure buying it now will do much for me. I am loath to offer advice, but my only suggestion is that rather than listen to the experts on either side of this debate tell you what to do, you should make your own best judgments, recognizing that they can and will change as more facts emerge, and act accordingly.